While actually attending E3 is quite the trip, leaving it is almost equally exhilarating. I don’t just mean finally departing LAX, leaving the city of millions of broken dreams in your jet engine’s wake, but finding any sort of solace amidst the endless din is both comforting and exciting. Whether it be in a parking lot full of Airstream trailers or a hotel pool that seemingly everyone knows about and ends up at by dawn’s first light, respite is welcome.

Oddly enough, refuge can be found on the show floor itself. In the South Hall where the third party developers and strange booths regarding television ownership and whatnot reside, there’s a borderlands. Quite literally that’s where the Borderlands booth is, but outside of the darkened ring of madness and lights and interminable trailers showing on egregiously large projector screens, you can see. You can see what this place is in its true form.

There’s nothing out here. Only people who fell to the battle of E3 lie here, slumped against walls and paying five to six dollars for shiny, plastic pizza. To the left is a befuddling sight. Apparently the United States Army has set up an obstacle course here, dumbed down for the physical likes of video game fans and journalists it has the appearance of an introductory RC car navigation course. But scanning further, there’s perhaps an even more confounding discovery.

There’s a mass of couches, abstract art, and, more importantly, people. In fact, people that are actively engaged in whatever it is they’re doing in front of over two dozen laptop and television screens (and tabletops). It’s a rare sight indeed, as your day is often consumed by huddling in lines with jaded press, going through appointments for coverage and not for joy or interest. Not that what we see under the triple-A guise isn’t good, but it’s rare we get a surprise.

That’s why this little wagon circle is so important. While not everything here is a winner, they’re nearly all refreshing. Whether with a dose of irreverence or indecency or an unabashed disregard for logic and sanity, we are reminded that many creative pursuits often go unnoticed as well as under the radar of focus tests and bureaucratic homogenization. In the open parts of my schedule, I often hid away in this bustling microcosm, and here are some of the things I found. 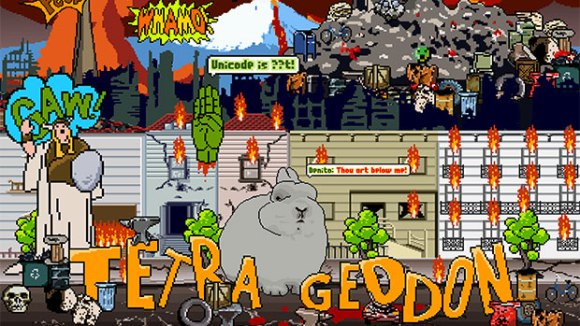 “The internet is my homeland!” That’s what developer Nathalie Lawhead has at the end of her Twitter bio, and it almost entirely and succinctly encapsulates the experience of playing Tetrageddon. It is far from a traditional game as it subverts the idea that it should work logically and intuitively. Instead, it opts for a landing squarely in the Ow My Brain land of mental overload.

Tetrageddon is a collection of nine minigames, but it’s really more a cohesive peek into a perfect display of absurdism. More accurately, it’s a brilliant estimation of what would it be like if you soaked up the Internet into a sponge, squeezed it out over cheesecloth, and took what fell through and put it into a game. Some games make more sense than others like one about abducting rabbits via UFO while others involve playing tic-tac-toe against a hamster at the gates of hell.

You can actually experience the game now either through your browser or via the App Store, and if you’re so inclined, you can also muck about with the code since it’s an entirely open source project. Play it. It’s vital you understand what it’s like to not understand what’s happening.

“Frantic” is how I would describe Paparazzi, a little multiplayer game from Pringo Dingo Games. It’s one paparazzo versus one celebrity, one trying to gain as much cash as possible from his snapshots and one trying to retain as much dignity as possible by remaining elusive. Played on a single screen, one player dashes about as the celeb via a controller and one clicks away on a mouse trying to get him in their sights.

It is deliciously mad. As the celebrity, you can only really slowly trundle about and then press a button to dash, but the walk is so painfully slow and the dash almost comically fast and ridiculous in how far it shuttles you in one go that you never quite feel in control, but in a good way. It encourages you to keep moving, more so than even the camera clicks following in your footsteps.

Crowds of people move up and down over the place as the screen scrolls, helping you obfuscate your movements, as do large static structures like buildings and oversized club speakers. It helps the celeb but hinders the paparazzo, stopping him from making any money. But the viewport of the camera reticle is quite sizable, so combined with the lack of punishment from frantically mashing away at the mouse and the controller respectively, it’s quite the devilishly frenetic and fun game. Check it out on Kickstarter. 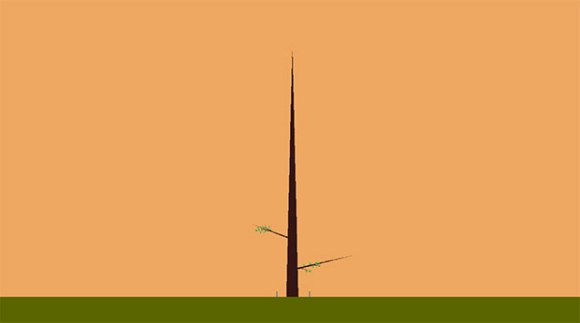 Developed by a single person under the studio name 6 O’Clock Games, T.R.E.E. is actually more of an art experiment than a game. There are certainly game-like qualities to it (it tracks how many fruit you’ve collected, for instance, but for no particular reason), but it’s really just about seeing how people interact with a singular instance of digitized nature.

Unsurprisingly, the game is all about a tree. You, as a player or curator or whatever you want to call yourself, go about either adding or removing branches. Then, as time passes, these branches grow and leaves sprout and fruit will grow. From the first day, I just saw an average little suburban-sized tree sporting a few dozen branches going every which way. By the end of the last day at E3, it had become a redwood-sized behemoth with an incredibly artistic and wholly unnatural fractal subset of branches.

While in early stages of development, the ambition to grow it is there. For instance, by placing the tree in a city background, the city will react to the growth of the tree, mimicking its health and responding to its vitality. It’s an eventuality, though, much like its release on its various platforms.

Pitched to me as a puzzle game influenced by Don’t Starve, my interest was almost immediately piqued. It turns out there’s quite a bit going on underneath the chipper veneer of Road Not Taken. It’s a puzzle game with an adventure game with a relationship simulator with roguelike tendencies. It’s startling how much is crammed beneath its happy surface.

The passage of time is measured in lifetimes and your actions in grid-based ambulations. Your goal in any given screen, as some oddly magical wizard-type thing/person, is to unite all children with their parents. By pressing a button, you pick up anything around you on any cardinal direction, and with another press you hurl them in that direction. It sounds simple enough, but moving with things in your mystical grip uses energy, and bottoming out on that energy will result in your death.

90-percent of people die in the tutorial, according to this Polygon piece. This is a substantially hard game, largely because it’s procedurally generated, so there are no set solutions for any given puzzle, just a possible solution. And as you add elements like creatures that mirror your moves and those that move opposite you, it gets increasingly complex. Then you toss on the crafting mechanic, which can occur inside and outside of puzzles, which are wholly combined into one giant over world and not discrete screens, it gets to be a bit brain-sweating.

Oh yeah, and you can forge and destroy meaningful, impactful relationships back in town. Sorry about your free time.